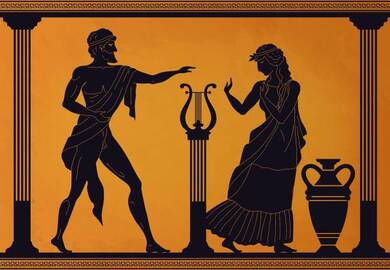 Great Books introduces students to interpreting literature, using works from various periods and cultures, viewed in their social and historical contexts, and read for their enduring interest. In this section of the course, we will read contemporary novels that rewrite classical Greek texts by Aeschylus and Homer. Aeschylus’s Oresteia (458 BCE) is the only intact trilogy surviving from the tradition of Greek tragedy, and it tells a story of family revenge to illustrate a shift from tribal feudalism and retaliation in ancient Greece to a social order where justice is enacted through the law. Homer’s Odyssey (8th or 7th century BCE) follows the adventures of the Greek hero Odysseus during his journey home after the Trojan War; it is one of the oldest Greek epic poems alongside Homer’s Iliad, which tells the story of the Trojan War, and both are considered foundational texts for western literary traditions.

In the first half of the semester, we will focus on the Oresteia and two contemporary novels that revision the Trojan War and Mycenaean Sagas from the perspectives of Cassandra, Clytemnestra, and Clytemnestra’s children, Orestes and Electra. The second half of the semester focuses on reimagined versions of the Odyssey, the first a retelling of Odysseus’s experiences during and after the Trojan War, and the second two novels from the perspectives of Circe and Penelope. Although each of the novels stay true to the world of the original texts—in setting, time, characters, and plot—we will explore how contemporary authors adapt, revitalize, and transform our understanding of Greek myth. We will think about how they reshape classical literature to reflect experiences and concerns of contemporary readers. We will also question how contemporary rewritings of myth link us to the past to tell stories that are both universal and specific to the cultures in which they are produced. Lastly, we will think about how contemporary writers utilize classical myth to decenter the traditional focus on the male hero by providing space for marginalized, oppressed, or silenced voices, such as women and slaves.

This course is scheduled as hybrid/partially online. The first half of the semester will be fully online with recorded lectures, class discussions of assigned readings on Zoom most Monday/Wednesdays (see class calendar in syllabus), and Fridays dedicated to working on your website assignments. During Weeks 9-13, we will plan to meet in-person for class discussions (Covid-pending) with continuing work on websites every Friday. Class meet time is Monday/Wednesday from 12:20-1:15 pm.
PPT: Overview of Classical Greek Myth and Sagas
PDF: Classical Mythology, The Odyssey

Unit One: The Trojan War and Mycenaean Sagas